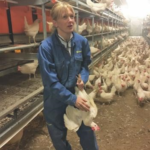 an agronomist in animal science and I received my PhD in anatomy and Physiology at the Swedish University of Agricultural Sciences in 2007. Since 2009 I have been working with welfare and production in layers at the Swedish Egg Association, which is a trade organisation that gathers the Swedish hatcheries, pullet rearers , egg producers, feed companies and packing stations.  In Sweden there are approximately 8,8 million layers of which 95 % are white hybrids.  There are about 300 commercial farms and the average farm size is 27 000 layers. Dominating housing system is barn-multi tier followed by organic production. We had no data of the prevalence of keel bone damages in Swedish commercial farms but knew that they occurred based on autopsy’s performed at the Swedish National Veterinary Institute.  In 2017 I participated in a Keel bone damage – training school at the University of Bern. After that I started to perform keel bone palpations when visiting the member farms of the Swedish Egg Association in order to try to get a small overview of the occurence.

In August 2018 I hosted a short-term scientific mission (STSM) on Implementation of keel bone damage assessment in animal welfare audits.  In the first part of the project, I together with Ine Kempen from the Experimental Poultry Centre (EPC) in Belgium, investigated the feasibility of implementing KBD monitoring in an existing animal welfare audit program. The Swedish Egg Association animal welfare program was developed during the transition from conventional cages to alternative system in the 90s in order to monitor animal health and welfare. Over time the program has continued to develop and today there are five different programs. The second part of the STSM was to create awareness among the farmers regarding keel bone damage by showing the palpation method. The last part of the STSM was to conduct, for the first time in Sweden, a field study to monitor the prevalence of keel bone damages in commercial aviaries and hens at different ages. Preliminary results of the prevalence study showed increasing incidence of keel bone fractures when hens become older. The study also showed that the incidence could be higher in a younger more nervous flock compared to an older calmer flock.